Reintegration day is full of emotions, including satisfaction 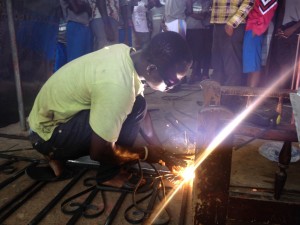 Upon entering the gates to the Challenging Heights Hovde House, you could tell that today was not a normal day. It was class time, but the children, most in their yellow and blue checked uniforms were not learning. They were huddled in small groups around the courtyard, milling about with their peers and vying for the attention of Stephen, one of the house fathers, and his camera. Then it becomes apparent that 17 of the children are not in their uniforms; they are donning their newly issued Challenging Heights t-shirts. When the bus pulls into the courtyard, the dull, underlying emotional tension of the day ratchets up because today is the day that those 17 children are being reintegrated with their family members.

Bernice, one of the social workers, calls the children over to collect the pieces they made during their time in art therapy. They scurry into the meeting room to stuff their artwork and new sandals into their bags, already packed with their clothes and toiletries. Throughout all of this activity and final preparations, their friends drape their arms across their shoulders and pull them close, shouting, “Sir! Sir!” for Stephen to take their picture together. Their faces are mostly adorned with smiles and excitement, after all many of them haven’t seen their family in years, but there are of course tears. Friends sad to be apart, children whose families aren’t quite ready for them to come home and concern about friends and siblings still on Lake Volta are the emotions that come bubbling to the surface and stream down their cheeks. Our shelter staff is prepared for this emotional day and makes sure to reassure those who are having a particularly hard time and check in with each of the kids who are still going through the rehabilitation process.

Once all of the final checks are made that everyone has all of their belongings, the kids are shepherded onto the bus. They press their faces against the windows and align their hands with their friends’, who are stretched up on the outside. The engine roars to life and the door to the bus squeaks shut. The kids remaining at the shelter step back, still with their arms stretched up, waving and shouting their good-byes as the bus backs out of the courtyard and on down the dirt road.

Our reintegration team has spent months preparing for this week. They began by tracing the children’s families, where they live, who they are, who is still living and who would be willing to care for the children once they completed their time at the shelter. Most of the parents did not know the fate of the children when they sent them to live with a distant relative; they were told and believed that their child was going to living in a nice home and enrolled in school. In those cases, we sensitise them to the realities of trafficking and the situation of many children on Lake Volta. We ask them about their income and livelihoods and provide support through our livelihoods programmes. Some parents did know the situation they were sending their children to, and in those cases, we find extended family members for the children to return to, such as an aunt and uncle or grandmother, who was also provide livelihoods support to. Based on the family assessment and an assessment of the child, we classify each case according to risk, which then determines the intensity and frequency of our monitoring visits.

The bus makes its way around the communities, sometimes driving far off the paved road, deep into the residential communities to the children’s homes, the reintegration team pointing out directions and turns and helping to navigate the terrain. As the bus pulls up, the activity at the house slows and eventually comes to a stop. The team steps off the bus, with the child following behind and the family members’ faces break into smiles. Siblings come running and sweep their brother or sister up into a warm embrace. The staffs gather the primary caregivers and explain that the children must attend school or their apprenticeship, that we will provide support for their education for the next two years, that our livelihoods programme is available for them and that if the child is re-trafficked, we will arrest them. Once everything is explained, understood and agreed to, the forms that give legal custody to the caregivers are signed and the team waves good-bye with promises to return in the next couple weeks to assist with school registration, while the family takes the child and their belongings home.

The bus then heads off to the next home, until all the children have been reunited and night falls. The major work of the transition is still to come, through our years of monitoring, but the smiles of satisfaction on the staffs’ faces is an indication of the success of the day.