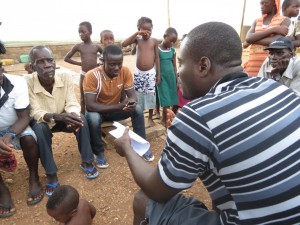 Challenging Heights has stated that it is disappointed in the Government for still failing to address the issue of Human Trafficking in Ghana.

Ghana has for the second consecutive year been classified as a Tier 2 Watch List country in the Trafficking in Persons (TiP) Report released by the U.S State Department last week due to the government’s inability to demonstrate enough efforts to prevent trafficking, prosecute criminals and protect victims.

The American government has warned that the country risks losing millions of money in aid if no effort is taken to address the situation.

Ms Pomaa Arthur, Communications Manager of the Anti-Trafficking NGO in a statement said that it is rather disappointing that systems and structures put in place by the government to fight trafficking are nothing but a cosmetic measure.

“This report reveals how much our government is unconcerned about the issues of trafficking and forced labour. Through government’s inactions, all efforts by other non-governmental organisations and agencies to bring an end to trafficking in Ghana appears to be nothing but a drop in the ocean,” she said.

Ms Arthur explained that since the Human Trafficking Fund was set-up several years ago, there has been less than GH¢200,000 deposited in that coffers coupled with a virtually non-functioning Human Trafficking Management Board in place.

She said although the government directly and indirectly receives funds from international organisations and countries such as the US to combat trafficking, the issue seems not to be on the country’s priority list as almost all government agencies mandated to fight trafficking are under-resourced or understaffed.

Ms Arthur noted that due to the government’s apathetic attitude towards the issue of trafficking, law-enforcement agencies such as the police and judiciary are equally laidback resulting in the country been classified as a source, transit and destination point for traffickers.

“Ghana is gradually becoming the hub of traffickers in Sub-Saharan Africa. Our legal structures are not working and traffickers have taken advantage of that opportunity to turn Ghana into an operation centre for their illegal activities. They know the police will not arrest them and even if they are, they will not be convicted,” she said.

Ms Arthur noted that it’s almost an established fact that most of the efforts to address Human Trafficking has been through civil society organsations such as Challenging Heights therefore, government needed to collaborate and co-operate well with NGOs who have the resources and know-how on trafficking related issues.

“Challenging heights has been rescuing trafficked children since 2005 and providing them with rehabilitation to ensure that they are psychologically sound before they are reintegrated into society. We are committed as an organisation to end this menace, but are efforts will be futile if government does not demonstrate the same commitment,” she said.

Ms Arthur said irrespective of what Challenging Heights or any other NGO does, government still remains the most effective primary tool for stopping trafficking in the country and ensuring that the country makes significant efforts to bring an end to the situation.

“We fear that if this government inaction on Human Trafficking is not changed, Ghana may well slip into Tier 3 in the next report,” she added.

You can find Ghana’s country profile from the 2016 Trafficking in Person Report here.