Advocacy and training put to use to stop child trafficking 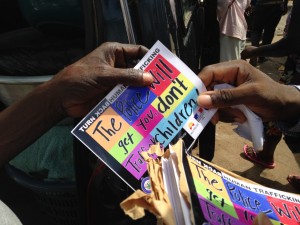 This fall, a bus full of children was stopped by police; the driver was questioned; all children were questioned, and they were turned BACK to their homes, away from the direction of slave labour.

Challenging Heights’ Advocacy Team says it came just after our Child Protection training, where Ghana Private Road Transport Union (GPRTU) leaders and other community leaders were taught about the realities and dangers of child trafficking in Ghana.

Since the training, our advocacy team has gone to multiple towns and cities in the Greater Accra and Central Regions of Ghana. Together with GPRTU leaders, the team tells taxi, tro tro and bus drivers about how common it is for children to be sent into forced labour on Lake Volta. Their vehicles are stickered with Turn Back Child Trafficking slogans and the message is spread.

The day the bus was stopped, it didn’t have stickers, but Ghana Police were vigilant. They suspected trafficking when they saw how many children were on the bus without accompanying adults and they were all taken to the police station. There, statements were taken from the driver and children, and police gathered that yes, this was a trafficking situation.

All of the children were turned back.

Since the “Turn Back Child Trafficking” campaign with Walk Free and now the Canadian Government, launched in June 2015, Challenging Heights has been demanding vigilance and awareness through the media. With press releases, press conferences, radio shows and interviews, we challenging Ghana Police to step up enforcement and pay attention to the reality that is putting Ghanaian children at risk and keeping them from inalienable rights.

Since the GPRTU training, the Challenging Heights Advocacy Team has done a lot of media work, through local radio shows and press releases. We challenge the police and demand vigilance as we question what the government of Ghana has done with its 2011-2015 National Plan of Action (NPA) towards the Elimination of Worst Forms of Child Labour (WFCL). The NPA will expire at the end of 2015, but 75% of what was planned has not been achieved.

Charity Althul, secretary of Swedru’s GPRTU, joined our advocacy manager on Radio Peace, a local Winneba radio station to discuss the stickering and voice full support of Challenging Heights’ efforts. Her consistent push toward awareness is the kind of splash we hoped to make in our campaign, and we expect others to jump on board as our message to prevent child trafficking is shared.