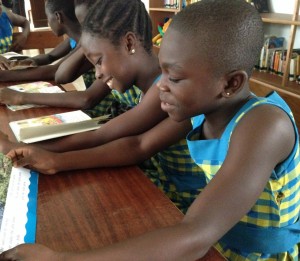 The best English speakers from five different schools pitted against each other for an intense recitation competition. The librarians at Hand in Hand for Literacy’s Challenging Heights Community Library hosted the event, offering prizes for winners, as well as a chance to compete again on a local radio show.

Head librarian, Madam Safowaa explained to the students that this competition is meant to implicate positive reading habits to those living in Sankor, near Challenging Heights, but also far beyond.

With the plan to be an annual event, Madam Safowaa and her team educate about various disciplines and uses it as a way to bring the community together. Each of the schools participating in the competition have students registered as users of the Challenging Heights Community Library.

The competitors were selected as some of the best English speakers in their classes; those were narrowed down to the top five to be on a school’s team, and the best one of those five became the contestant. This means one person competed from each school, with about four supporters watching from the audience.

A local assembly member served as an honoured guest and spoke to the children about the importance of education and community.

There were three rounds to the competition. First, each contestant was asked to summarize a story they were given to prepare before the event. Second, the moderator mentioned a part of the story and the students were supposed to share the exact line, quoted, from the original story. Third, each student was given two questions to answer; if they were wrong, the student to their left could “steal” the answer and get an extra point.

A female student from a nearby school in Winneba, H&E, won the competition; she spoke with confidence and competence.

Through competitions like this, teachers and librarians at Challenging Heights School hope to inspire thoughtful reading and engagement among students in Winneba.