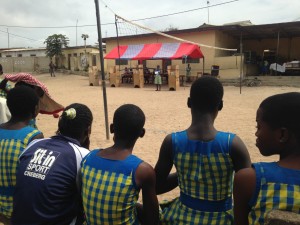 “Mr. Chairman!” is how each student began their manifesto, explaining why they are the best candidate for the role in which they were running in the Challenging Heights School Prefect elections.

As teachers at Challenging Heights School frantically cut ballots while children enjoyed their break time, candidates for five different school offices prepared themselves to deliver their “manifestos” (speeches) to the student body.

This is the first ever school elections at CHS, and headmaster, Eric Asamani, believes that teachers and staff will benefit from having students help self-govern and keep their classmates in line, organized, and quiet. Along with participating in overseeing aspects of the school, Asamani thinks that participating in the election process will help students in their futures. They will better understand the democratic process and become better versed in public speaking.

The election held an open voting process, where the numbers would determine winners; nothing was kept secret.

Candidates campaigned with posters of their pictures and “mottos” plastered on school buildings for about a week. They ran for “School Prefect” for both boys and girls, which is almost like a “class president” role. Specifically the School Prefects will take responsibility for keeping students in order if teachers aren’t around and communicating information from staff and administration to their peers.

Next, two students ran for the “Grounds Overseer” role, which is one that will make sure school grounds are clean and well kept. They promised to find ways to convince their fellow students to come to school early and tidy-up, and determine the best place to gather trash so that it can be burned once a week.

The “Sports Prefect” position was hotly contested, with three candidates vying for the role to help teachers organize Friday afternoon sports competitions, teams and leagues for the school.

Along with Sports Prefect, the “Entertainment Prefect” will work closely with CHS staff to arrange entertainment for Friday afternoons. This role includes music and games that all children at CHS could enjoy.

Lastly, two children spoke their manifestos aiming to become the CHS “Chaplain,” to help their peers reach their spiritual potentials.

Each position has a Number 1 and a Number 2 position, almost like a “vice” role, which can help the winner and still participate in the governing process.

The school government leaders come from JHS 2, which is the second to highest grade at Challenging Heights School. The JHS 3 students will be preoccupied studying for their Basic Education Certificate Exam, which they must pass to graduate and move on to Senior High School.

All students in Classes 4, 5, 6 and JHS 1, 2, 3 voted in the election after they listened to their classmates explain why they would be the best fit for each job.

Candidates spoke in proverbs like, “It is not a mistake to make a mistake, but it’s a mistake to repeat a mistake,” “Cleanliness is next to godliness,” and “all work and no play makes Jack a boring boy.” They made promises like requesting and acquiring new balls and equipment for sports, good music to be played at school events and the Entertainment Prefect candidate even danced in the middle of the school yard as his peers watched and cheered.

When it came time for voting, students lined up by class and one by one, they received the ballot for each race and placed their thumb in ink and stamped their thumb by the candidate they wished to win. Voting with a thumb print is standard practice for all elections throughout Ghana, since many eligible voters may not be literate or able to use technology often used to vote in Western countries.

As voting commenced, music blasted on loud speakers and students from all classes danced and played as they waited for results. It was a lively day full of excitement as students were eager to cast their votes.