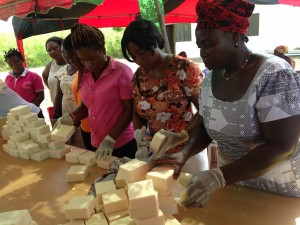 “One of the kids here calls me as his elder brother,” says Stephen Appiah, the newest Shelter Assistant at Challenging Heights’ Hovde House rehabilitation shelter.

Stephen doesn’t only look after the 50+ children at the shelter, but he’s become a part of their family as they transition from a life working in often dangerous conditions as slave labourers on Lake Volta, back to their families in their home communities.

As the children are caught up in their classes and go through extensive counselling, Stephen wakes up with them at 5:30 a.m., helps them with chores and gets them ready for the day. He’s the one they may cry to if they have bad dreams or need help washing up. It’s a 24/7 job, in which Stephen and the other shelter assistants work 20 days before they have time off for 10 days.

He laughs that he doesn’t get much sleep when he stays at the shelter, as he shares a wall, just one room over, from one of the boys’ dorm room. Stephen says he hears the children at night, when they’re happy and laughing or playing around, but also when they argue. He says it doesn’t bother him one bit, “That’s why I’m here, so I have to cope with it. It’s no problem.”

Before becoming a shelter assistant, Stephen worked at the Hovde House as a security guard. He spent extra time talking with the children and even playing with them, which was not specifically part of his role. After nearly two years of protecting and guarding the compound, shelter managers asked Stephen to apply for the role of shelter assistant. He’s now one of two men who live on site, and is happy to have a more direct role with the children.

“At times we play football with them just to let them know that they are free here. And being here too is like being at home, so they should feel comfortable when they are here,” Stephen says.

With a big smile, Stephen talks about how much he enjoys playing football (soccer) and games with the children. He watches them and works with them as they mature in just a few months while at the shelter. When they arrive, Stephen says they may behave strangely. He says they may want to be at home, and sometimes they are crying and upset, but soon, they get used to living with the other children. If a child arrives misbehaving, Stephen says it usually only takes a week for them to get comfortable, believe that they are safe, and act appropriately.

“We let them know that here is like home. So they should relax and they should stop crying.”

He and the other shelter assistants try to calm the children down, and stress that violence will not be tolerated. Along the wall of the dining room, there is a sign that reads, “Hands are not for hitting.” Stephen says he enjoys teaching the children how to behave, and he sees how good they become by the time they are ready to get back to their families and communities.

Stephen says it’s not hard for him to watch a child leave because he knows they are very happy to go home, and he is happy to be a part of their transition.