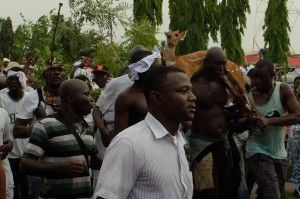 Much excitement filled the streets of Winneba during the first weekend in May. The annual Aboakyir Festival brought thousands of visitors from other places to enjoy all the town has to offer.

Aboakyir is a celebration by the Efutu people of Winneba. In order to honour their tribal god, Penkye Otu, which is thought to have helped the people settle on this coast land and protect them.

People throughout Winneba, including Challenging Heights staff, students and families we serve, belong to one of two Asafo companies, the Dentsifo and Tuafo, which are divided by clans. Men from both teams go on a deer hunt in the bush to be the first to bring back a live deer to their chief, before sacrificing it to Penkye Otu.

Historically, the tribesmen hunted and brought back a live leopard, but after many years of the leopards hurting or killing people, they appealed to Penkye Otu to accept a deer as a replacement sacrifice.

Throughout the week, the two teams, which dress in red or white, faced off in different competitions. Tuesday, the fishermen from the Penkye fishing district raced a regatta with their fishing boats.

Wednesday, football players from both red and white teams played matches on Challenging Heights’ Winneba United Park. Sponsors of the game wanted a nice field for spectators to come and cheer on their respective clansmen. Winneba United Park has lush grass, as opposed to dirt or rock ground, which made for a perfect venue. Challenging Heights was excited to be a part of the festivities.

Thursday, parades and celebrations began and they continued throughout Friday, Saturday and Sunday. Huge crowds of people came to visit and participate. Corporate sponsors set up booths along the main corridors and people ate and drank and danced in the streets.

Children danced as they waited for the judging of a cooking competition on Friday afternoon. As the afternoon continued, small parades of friends and families dressed in red or white paraded through the streets. Many of them stayed out all night, and met together at 3 a.m. to pray before setting off for the deer hunt.

Around 6 a.m. Saturday, first the red and then the white team ran through the centre of Winneba, splashed with special water meant to protect them during their hunt.

A deer was captured first by the white team, which brought it to present to the chiefs waiting at Humphrey’s Park. The chiefs, however, weren’t there yet, so the white team took a lap through town carrying the deer on the way to Penkye Otu’s shrine. A few hours later, the red team also arrived with a deer and paraded it through the park where hundreds of spectators cheered and danced.

The winning white clan chiefs rode a horse statue through town as team members paraded and danced through town Saturday afternoon. Celebrations continued through the night and into Sunday.

On the last day, the red and white teams come together and sacrifice the deer to their Efutu god, Penkye Otu.

Families that Challenging Heights serve have participated in Aboakyir for generations. The yearly celebration is one of pride for Winneba, where traditional culture is highlighted and preserved.