Diary of a Rescue 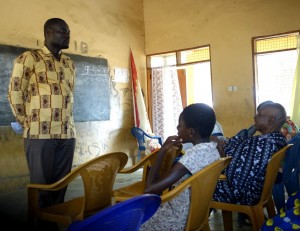 The Challenging Heights team successfully completed another rescue trip to Lake Volta, bringing back eighteen children undertaking hazardous labour in the fishing industry there. Here one of our dedicated Field Operations Officers shares the experience with us

4:30AM. After nearly 10 hours of driving we made it to our temporary shelter in order to prepare if for the rescued children. Here is where they stay until we begin our journey back to our rehabilitation centre. After cleaning and another 2 hours of driving we finally made it to our destination at Yeji and met the District Police Commander to brief him on our rescue mission for the coming week.

6:20AM: We began our day with brief meetings to discuss the day’s activities and make necessary arrangements which include serving letters to heads of government agencies such as the Social Welfare Department, Mercy Commander and the police.

11:20AM: We travelled to the neighboring village to gather information which will help us to rescue a child. The Community members cooperated but the trafficker we were looking for was not found.

5:30PM: the rest of the rescue crew, the boat operations team, arrived at Yeji shore from where it is held outside of rescue missions. Work is done on the boat to prepare for the coming rescue mission.

10:05AM: The rescue team set off to a community known as Number 4 to rescue the first child on our list.

After nearly four hours on the lake we arrived to the community where we were met by a local fisherman who took us to the opinion leader of the community, fante-sab chief. As we discussed the mission with the chief we were told the trafficker we were looking for was the fisherman we met at the lake shore.

After talking and making negations the trafficker promised to give the child to us but to our surprise he conspired with his wife to take the boy away. When we tried to locate them we were unsuccessful so we decided to seize the traffickers’ outboard motor.

11:00AM We successfully rescued a child who was trafficked one year ago. She was mainly forced into domestic servitude by the trafficker.

She said that she was very happy to be rescued because her dream is to go to school-something she has never done before.

Sleeping was difficult this evening as we experienced a heavy down pour from night to dawn.

5:30AM: We set off on the lake despite the rain for we will not let it deter our rescue operation for the day.

After nearly 2 hours driving on the lake we arrived at the next community. Through negotiations we successfully rescued 3 boys from trafficking.

5:30PM: The first part of the rescue mission came to an end with 7 children on board and will head back towards Yeji.

6:00PM: We arrived at Yeji and the children were transported to our temporary shelter with several staff members as there care-givers.

8:30PM: We ended our day with the children safely at the shelter and exhausted from the trip. As the children stayed at the shelter under proper care the rest of the rescue team went back to Yeji in order to prepare for part II of the operation. Ending the day full of excitement for the children we have already rescued.

6:10AM: A brief meeting is held to plan for the next part of the rescue operation.

7:15AM: Several members of the team head to the Yeji Police Station to get a police extract and letter of authorization to enable us to carry out the rescue mission to the areas we are seeking to go; in addition to also asking for police/immigration assistance when the need arises.

8:20AM: Other team members go to the Yeji Police Station and Social Welfare Department to assist in a child trafficking case that was reported to the police station. A mother was trafficking her 12 year old son to engage in child labour on the lake but the trafficking was intercepted by a Good Samaritan in the community. This led to the arrest of the trafficker and the boy’s mother who were sent to the Yeji Police Station. The matter is under investigations but the boy is safely attending school as a presiding member of the Yeji district Assembly has pledged to sponsor the child’s education while the boy’s Uncle has agreed to full responsibility of the child. They will continue to be assisted and monitored by the Yeji Social Welfare Department.

10:49AM: The rescue team set off to the lake to continue the rescue mission.

3:20PM: After close to four hours of travel on the lake we finally arrived at our next community in search of a trafficker and the child he was holding.

After several negotiations at the Chiefs Palace we were told the trafficker has returned the child to the source community. However, several checks from our sources have proven other-wise. By this time it is already night has fallen and we decide it is best to invite the Police at the next community to affect their arrest.

6:15PM: The boat finally arrives at the next town with a police station and we meet two police officers at the station in which we brief them about our mission and what we are asking. They tell us we should come the next morning

6:10AM: The team went to the police station to meet the inspector in-charge of the station.

They told us that they don’t have jurisdiction to make any arrests because they technically reside in the Volta region and the community it happened in is n the Northern Region. Yet, it takes over 3 hours on the lake to travel to where they told us we should go. After several more pleading attempts and discussing with them they finally agreed to give us one policeman in order to accompany us.

9:16AM: We finally arrive to the community where the incident from the night before happened.

With assistance from the police officer and some cooperating community members we were able to seize the traffickers canoe, out-board motor, nets, and their fishing implements.  And send them to the police station with the officer. The police agreed to release the boats and other items we seized after receiving information from us that the said child had safely arrived at the Challenging Heights shelter.

We took the opportunity to rescue another girl in the same community who has been involved in child labour on the lake for more than four years-although she found us. She ran into our boat pleading that we take her with us and return her home because of what she has been subjected to on a daily basis. We agreed and she joined the rest of the children on our boat.

11:50AM: We travelled to the next community in search of multiple children on our identification list.

News of our activities in the previous community had spread through-out the shore and various areas therefore traffickers easily cooperated with us. We were able to rescue 3 more children from this community.

4:10PM: We decided to end our operation for the day due to bad weather on the lake. Although disturbed by the weather we ended with lots of joy after being able to rescue five children today.

7:20AM: The weather continues to be bad but we decided to begin our mission for the day.

Due to the extremity of the weather we were forced to stop on-shore for some hours before we can continue the rescue. Most of our belongings are now wet.

2:20PM: Three more children have been successfully rescued and safe on the Challenging Heights boat.

We were hoping to bring our mission to an end today but we still have some children on our rescue list that due to the situations we have faced and the bad weather we have yet to be able to get. In addition because of the lake drying up several traffickers have relocated therefore we have to do follow ups on those cases in order to find them. We travelled for many hours gathering information about where they have re-located.  For some of these situations we were successful while, disappointingly, for others we were not. We will continue those investigations and they will continue to be on the list for our next rescue.

5:30PM: We arrived at the temporary shelter where we will be sleeping for the evening before continuing our journey home tomorrow.

6:20AM we embark on our journey back home overall full of joy and happiness. After a difficult rescue we were happy to have finished. We had 10 children with us and in additional to the six that were already sent to the shelter we concluded the trip with 16 children rescued and a promise of one more to be voluntarily returned to the safety of our rehabilitation shelter.

8:45PM: We finally arrived to the Challenging Heights Rehabilitation Shelter with all the children happy to begin their new hope of life.

After normal-formalities as the shelter the rescue team returned home tired and happy to meet our family and friends. In total the team brought back 18 children, but we are still expecting more to be come to our shelter as a result of investigations and community actions following our rescue trip.