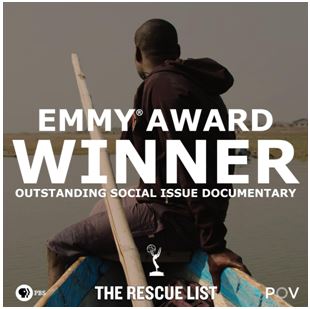 Challenging Heights is pleased to announce that the film, The Rescue List, has won America’s Emmy Award 2021, in the Outstanding Social Issue Documentary category.

In the year 2015, Challenging Heights entered into an agreement with a San Francisco based documentary film makers, The Collective Hunch, who produced an ethnographic film about the work we do. The resultant film, titled “The Rescue List”, which took three years to produce, was eventually released in 2018.

We thank all of our partners who have supported the film, for their diverse roles in making this possible. We especially celebrate the courage of the two American film makers, Alyssa Fedele and Zachary Fink, whose untold sacrifice made all these possible. We also wish to thank our US based advisors on the film, Mark Hamilton and Lisa Halsted, for their unflinching faith, not only in the work of Challenging Heights, but also being such loyal cheer leaders of the film makers.

To all of the many staff, children, and associates of Challenging Heights who played key roles, in facilitating the production process; we say thank you.

In the words of the San Francisco International Film Festival, “The Rescue List portrays an artful balance of ethnography and visual poetry while it brings to light the overlooked reality of child labor and slavery in Ghana”.
The 42nd Annual News & Documentary Emmy Awards honored contents from more than 2200 submissions, judged by a pool of 950 peer professionals from across the television and streaming/digital media news and documentary industry.